I was once told I was not allowed to flash back to wars I was not in.  To be fair, there was a UH-1 slick involved, there was Creedence blasting from the speakers, we may as well have been in a 'Nam movie.  I bring this up because I am feeling increasingly nostalgic for a game I've never played.  In fact, until recently, I never even owned it.  I'm talking about TSR's Top Secret RPG. 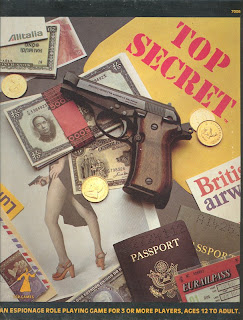 Don't get me wrong - I played the ever-livin' crap out of Top Secret/S.I. back in high school.  It still has one of my favorite game engines - simple, d100 skills, combat uses the ones die to determine hit location...  It was pretty damn cool.  I used it to do a M.A.S.K. game in the late '90s that was well received by the players.  The first car I ever bought was an '86 Nissan Pulsar - and I was gratified to find the stats for that car in the Top Secret/S.I. equipment list.  A great game that in my opinion is unappreciated.

What I'm talking about, though, predates the "S.I." part by about seven years.  The original Top Secret RPG from 1980/81 was a single saddle-stapled volume like many other early TSR games.  It came in a boxed set like many other TSR games.  It dripped Golden Age awesome, like many other TSR games.  While flipping through Top Secret I started seeing all the things that I loved about D&D, Star Frontiers, Gamma World and Gangbusters.  Jim Holloway artwork, for one.  Rules that were all over the place, but somehow kinda made sense.  A class-level system for espionage.  Spy missions that looked suspiciously like dungeon crawls.

I never once played the original or marginally cleaned up second edition of Top Secret.  I wasn't even a gamer until two years before Top Secret would be replaced by S.I.  Sure, I watched Cloak & Dagger with Dabney Coleman about a zillion times on HBO as a kid, so I was aware that espionage RPGs existed, but my first real dalliance with them was the Victory Games James Bond 007 RPG and GURPS Espionage.  I still refer to both books regularly when I am in an espionage mood.  Those and the Covert Operations Sourcebooks for Top Secret/S.I. (which are top-notch collections of actual Cold War events.)

So... if I've never played this game, why do I want to play it so badly?  Why am I suddenly hyper-interested in this ancient game line that I never actually played back when it was new?  When Top Secret was published I was 6 years old, and not yet a gamer.  Perhaps I am fascinated by it for the same reason I am fascinated by so many other things - I am preoccupied with 19, 19, 1985.  I miss the 80s.  I miss the Cold War.  I miss the world I grew up in.

I suppose this eventually happens to everyone who reaches a certain age.  I remember rolling my eyes as the old folks insisted that Lawrence Welk represented the epitome of modern music.  At the time I was listening to Huey Lewis and the News, Cyndi Lauper and The Cars.  I remember listening to tales of America under FDR, and Truman and Ike.  Just as those older folks pined for the America they grew up with, so too do I.  At least I guess.  I wish my kids could wake up on Saturday mornings and have the same experiences I did.  Cereal, a pillow and PJs, and The Smurfs, The Real Ghostbusters, hell, even Star Wars : Droids.  I have a lot of these shows on DVD.  My son and I watch Thundarr together, and the D&D cartoon.  My 2-yo daughter loves He-Man and She-Ra as much as her brother does.  I guess it's the experience of being excited to see the next new episode - not having them on-demand to devour entire series in an afternoon.  I dunno.  Damn kids.  Get off my lawn!

Is it normal to reach a certain age and feel something is just missing from the world?  I look at all the technology that's been developed in my lifetime.  My smart phone and tablet rarely leave my side.  Just a few years ago a tablet was an expensive commodity, and now our family has three of them none of which we pad more than about $225 for.

With all of that, though, I still play Dungeons and Dragons with my friends.  I can't wait to teach my kids how to play tabletop games.  I still play Atari and NES with my little ones, as well.  We watch old cartoons.  I read them the books I was read as a kid - often the very same copies thanks to my mom and grandma.  I watch Cheers, and Night Court, and SNL with Dana Carvey, Phil Hartman and John Lovitz.

So - is my sudden interest in Merle Rasmussen's roleplaying opus rooted in a nostalgia-by-association because it was published in my own sacred decade?  Is it that leafing through Top Secret I can see the bones of the Golden Age of TSR - that it just "feels" like the games I grew up loving?

I dunno.  I got nothin'.  I have no idea why I suddenly want to devour these books and play this game.  I just know that at the moment, everything Top Secret is fascinating to me...
Posted by The Old Dragoon at 13:04 No comments: