One of my favorite cartoons when I was a kid was the amazing Dungeons & Dragons cartoon that aired in the early 80s.  The main characters were transported via an amusement park ride into "The Realm of Dungeons & Dragons" where they met Dungeon Master, a small, wise, almost Yoda-like character who gave them mysterious clues in their quest to get home.  The Realm an amazing place with some incredible visuals of fantastic locales.  A prison  held aloft over bubbling lava by massive chains.  A Dragon's Graveyard filled with draconic skeletons and magic items.  A floating castle and magical islands - all suspended by some arcane power in midair, some stationary and some slowly traveling across the landscape.

This is where I am going to set the DCC game I plan to run for Extra Life.  But have no fear, the PCs will not come from Earth, and the kids who are desperately trying to get home will not make an appearance.  Rather, we are going to explore the fantastic elements of the Realm in a way Saturday Morning TV did not make possible.  Never once did a sword find its' mark.  Never once did one of Hank's arrows pierce an Orc, nor Venger's magical spheres immolate a foe.  Standards and Practices, dontcha know.  Can't have that kind of violence on Saturday Morning TV.

But the Realm existed offscreen.  It existed before Hank, Sheila, Bobby, Diana, Eric and Presto arrived.  If they ever made it home, it presumably continued to exist after they left.  So let's talk about The Realm of Dungeons & Dragons.  It's a much darker place than we are shown onscreen.  The Orcs employed by Venger are fearsome warriors.  Villages like Pendrake do enlist adventurers for their own protection, since farmers banding together into militia can only barely hold their own against the Orcs, or Bullywugs, or giant Scorpions, or the Beholder...  The Realm is fraught with danger, and many free cities like Tardos close their gates to outsiders.  Other settlements, like the Queen Zinn's realm, are under curses or worse.  Venger teeters on the edge of ruling all of the Realm, held back only by some stalwart enclaves and the depredations of Tiamat, who would be no more pleasant an option than Venger as an overlord.

The heroes of the Realm, like Strongheart, Ringlerun and Melf are certainly outnumbered by the forces of evil.  But we know there are settlements that remain free, like Helix.  And this is how we will begin our story, by mixing the Realm of Dungeons & Dragons with Dungeon Crawl Classics.  DCC has a reputation for gritty, and unpredictable magic, and evoking late 70s RPG tropes.  So to merge the two...

A great darkness is descending upon the Realm.  Magical energies are surging, causing the spells of even well-meaning magic-users to result with unpredictable effects.  The very fabric of reality seems to be unraveling, and none can understand why.  Several settlements send representatives to seek the counsel of Dungeon Master, who has been stricken just as others have by this world-bending malady.  Dungeon Master meets with the PCs in the Forest of Know Trees, who reveal to Dungeon Master and the PCs that the Magical Malady is caused by a massive influx of pure magic from other Realms.  This concentration of Magic is causing a similar problem in many other Realms- Magic is behaving erratically, or perhaps draining from a Realm.  In fact, players who wish to have a PC hail from any other D&D setting could conceivably be transported to the D&D Realm as they search for the answer to their own world's problems.

Once so informed, the PC group must quest for the source of this Magical Malady, and find out who or what is behind it.  Then they must figure out a plan to defeat or destroy it to return all the worlds to normal, before the gathering of the magics of countless realms destroys them all.

The PCs will visit some of the exotic locales of The Realm in their quest.  The spired city of Kadish, the Slave Mines of Baramore, The Great Glaciers... They may run into some of the more iconic Bad Guys of the D&D Realm.  But the kid gloves that defined the TV series are off.  This is a Realm where magic is unpredictable, death extremely possible, and even Dungeon Master has no idea what is really going on.

To donate to our Extra Life efforts for this year, click HERE.
Posted by The Old Dragoon at 17:44 No comments:

The Old Dragoon has just completed his first tour of duty as a college professor.  All that work getting my MA paid off.  I have been hired as an adjunct faculty member in our Student Development department, and I am currently teaching my second crop of students in the Effective Learning course, EDUC 1300.  It's incredibly satisfying work, my students wrapped up our 8-week double speed semester by bringing donuts and a card in which they wrote some wonderful commentary on how my efforts have helped them become better students.  It's moving to know that I've actually made a difference for these kids, and that I've taken a course none of them actually wanted to take and made it interesting and even a bit entertaining. 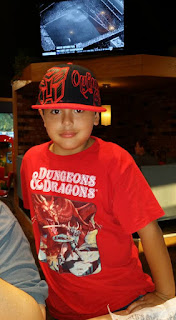 So teaching is now my secondary gig on top of my 40/wk as a senior IT technician.  It's hard to find time to keep the dice rolling, but now that my first go-round is over, and I'm repeating the material for new students, things are easing up a bit.  I've been running some D&D about once a month for my son and my goddaughters, and that's been a blast.

My son Zane is shaping up to be a pretty good combination of the geek I was growing up and the sportsman my dad and stepdad wish I'd been.  The kid has an amazing arm for football, and is now a yellow belt in Tae Kwon Do.  I'm so proud of him.  My daughter Kaylee is pretty awesome, too.  I can't wait to post a picture of her in her Rey costume for Halloween.  It's now been five years since I've been their dad - we fostered and adopted - and it's been a crazy adventure, but the best one yet.  The only thing I  love more than a good tabletop game is my wonderful little family - my wife, my kiddos, and the den of geeks we've assembled into our community.

So... what's this about Extra Life?  Well, our gaming club is going to be undertaking a 24 hour game to raise funds for Extra Life in support of the Children's Miracle Network hospitals.  It works like a charity race, people sponsor others to play.  But in this case, we're challenged to play for 24 hours.  Since we have a couple of members who've requested we break the 24 hours up, we've elected to do it in a six hour session on Friday,  11 November 2016.  We'll hit a twelve hour session on Saturday, 12 November and wrap up with another six hours on 13 November.

Posted by The Old Dragoon at 16:54 No comments: