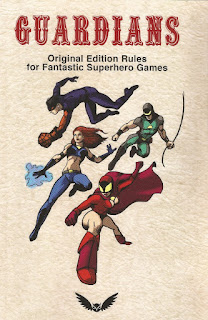 One of my unexpected acquisitions at North Texas RPG Con 2016 was the Guardians RPG, a 98-page book by David Pulver and Thomas Denmark that asks the question "What if Gary Gygax had been into comic book supers instead of fantasy in 1974?"

This turns out to be a GREAT question.  What Guardians is at its core is the D&D '74 core with supers in a single volume.  I've cover-to-covered the book (not hard with the page count) and found that I would actually love to run this over even my favorite Supers rules, TSR's Marvel FASERIP.  I want to take this for a spin and see how it runs in a small campaign.  Every page has some small tidbit that makes me want to take this game out for a spin, from the simple way in which it handles supers to its almost shockingly basic way of covering everything else.  It covers just what it needs to cover to be true to the genre and doesn't get bogged down in unnecessary details.  No lengthy skill lists, no pages of equipment porn, a tank is a tank regardless of model or nation of origin- it's just about Supers and their adventures.  Everything else, true to comic book roots, is just background detail.

The very core of the game is what you'd expect.  Six Ability Scores, generated 3d6 in order - STR, INT, WIS, DEX, CON and CHA.  The Ability Score Modifiers are the ones from the 1980 B/X edition rather than the simpler +1/-1 range of '74 D&D, however.  This is for good reason - the table is expanded far past 18.  All the way to 101 and beyond, in fact.  A character with a STR of, say, 30 can carry 8 tons, is +8 on attack and damage, and adds 3d to the normal 1d3 of a human fist.  Likewise a DEX of 30 would yield an Armor Class of 18 or 2(1), depending on the GM's decision to use ascending or descending Armor Class, and whether base AC descends from 10 or 9.  Roll d20 to attack, and bonuses.  There's one Saving Throw, which is modified by a different Ability Score depending on situation.  Basic, basic, basic bare bones D&D.  That's where the Supers part gets tacked on.

Origin replaces Race, and we have several choices.  Human, Exotic, Mutant, Robot, Cyborg, Super Alien, Supernatural and Superhuman.  These cover a lot of the fun origins you might choose if you wish to emulate characters from the Marvel or DC universes.  Some examples might be Hawkeye (Human), Rocket Raccoon (Exotic), Nightcrawler (Mutant), Ultron (Robot), Cyborg (Cyborg!), Superman (Super Alien), Doctor Strange (Supernatural), or Spider-Man (Superhuman.)  Each of these choices grants the PC a varying number of resources during character creation.  These resources are Gifts, Powers, Limits, Issues, and Special.

Gifts are usually gear or skills.  Powers are super abilities.  Limits determine things like vulnerability to Kryptonite or the need to transform into a super-form.  Issues are life complications, like having to take care of Aunt May or a public outcry against those dirty Mutants.  Special covers specific things, like Humans getting +6 Ability Score points to balance out not having any powers, or Cyborgs automatically getting the Robot Body trait.

Classes in Guardians are pretty straightforward.  Bruisers are your beatdown heroes.  Super-Agents are also what it says on the tin, and have a great selection of special abilities to set them apart from other supers and to make one Agent distinct from other Agents.  Power Wielders concentrate on Energy Point, which power certain superpowers, and focus more on the use of those powers than physical combat as Bruisers and Agents do.  Gadgeteers use their Gadget Points to create devices that emulate superpowers.  This is where you'd have your Iron Man or Batman type characters.  In fact, normal humans get a boost to initial Gadget Points to make up for not having innate powers.

There are tables for Gifts and Power Themes, though there is never a requirement to roll for Powers.  The table is there for inspiration. These tables are followed with the short but fairly diverse power section.  Powers grant the described abilities, but there are also "Superior" and "Ultimate" versions of many powers.  Limits follow the Powers and describe some of the classical superhero limitations that may plague the heroes and villains of the game.  The Issues come after this, and a section again brief but complete enough covers equipment.  After the equipment section are the rules, which include some pointers on the superhero campaign and an example of play.  I did run across a couple of rule references that frustrated me a bit.

Problems:  There are two things about Gadgets that are a bit vexing.  The Starting Gadgets heading on p. 48 refers the reader to the "Gadget Creation Rules" which I have been unable to find a header for.  Just below this, there is a paragraph beginning "A gadget is an item that embodies one or more super powers." and goes on to describe what a Gadget Point buys.  It appears this *is* the Gadget Creation rules and that a header was missed somewhere, since below the rules for new gadgets and their cost appear.  This could be a LOT clearer.  Also, it mentions "the usual level restrictions on Superior or Ultimate powers apply."  I could not find these restrictions, even with the help of the Find search in Acrobat.  Since the example character buys a Superior power for her Iron Maiden battlesuit, at least some Superior powers are available at 1st Level...

Now, I'll tell you about the first Guardians PC one of my players created with my guidance.  My friend Randi loves Vampires, and she loves dual-pistol characters in Shadowrun and other games.  With this in mind, I pitched a character concept to her that she rather liked, and she grabbed her dice to help me test out the PC generation rules for Guardians.

The rules have you roll 3d6 straight down, and so we did.  Our new hero had STR 12, INT 6, WIS 12, DEX 10, CON 11, and CHA 11.  Not terribly inspiring.  The interesting part is that these Ability Scores turned out to not be too terribly limiting to the PC as we added an Origin and Class.  For Origin, we chose Supernatural, as the PC was going to be a Vampire.  This set the initial number of Gifts/Powers/Limits/Issues.  For class, we chose Super Agent.

The Super Agent class gives some really neat bonuses.  Our Agent was martially trained, so would roll 1d4 for bare hand damage instead of the traditional 1d3.  All weapons and armor are available, and the class comes with a very Thief-like "backstab" style sneak attack for +4 To-Hit and double damage.  Dark Fighting gives half penalty in darkness, and the PC can choose a Combat Specialty.  Knowing Randi's fondness for two blazing firearms, Gunslinger was a natural choice.  This gives her +1 To-Hit and damage with firearms, and gives her an immediate additional attack if her ranged attack incapacitates a foe.  Sort of a gun Cleave.

Her two Gifts we rolled on the table and got a super vehicle and a Gadget Point.  The vehicle had to be within her original starting cash, so we rolled $9,000 and found we could only afford a motorcycle.  The cycle has two tricked out specs, so the DR and Hit Points of the cycle were doubled.  For a Gadget we decided to make the item magic instead of mechanical, and the Amulet of Alucard was born, riffing on the Eye of Agamotto and the tendency for geek culture to use the name "Alucard" a lot.  The Amulet gives a DR 8 and grants an AC of 17, or +2 to an already better AC.

Powers were a bit difficult, as she only got 4, and Vampires tend to have a LOT of powers.  Part of this was alleviated by "Features" - these are less powerful entries in the powers list that count as 1/3 of a power.  We picked up Claws/Fangs as one choice, Danger Sense and Detect Supernatural as the other two.  We then picked up Haste to offset our Agent's average DEX and be Vampire-fast, Life Drain to emulate the blood drinking and help power the use of Haste, and Immortality.  Now, we could have taken Super Strength instead of Immortality, but the second played into the character concept and the Agent was designed to do most of her fighting with pistols in any case.  There's always the next choices as level increases.

For Limits, we took depowered by sunlight, naturally, and Dependency: human blood.  Now, a story was starting to form.  Since our Agent was only depowered, not killed, by sunlight we explained her rather average STR, DEX and CON by the fact that she was never fully turned, and only has some of the abilities of a full Vampire.  Since we were considering this to be a potentially Marvel Universe game, this neatly sidesteps the time period in which no Vampires were said to exist on Earth thanks to Blade.

For Issues, we rolled Old.  This played right into the other die rolls, including the choice of Immortality, and gave us a backstory.  This Agent is none other than Wilhelmina Harker, in a suspended torpor since 189x.  Her low INT score reflects not a lack of intelligence, but a lack of familiarity with modern technology.  We agree that when the PC picks up another power at 3rd Level, we can take Super Ability: Intelligence to reflect her finally becoming comfortable with the modern world.  In light of this neat story, I let Randi re-roll Agent Harker's INT and she gets a 10.  This will result in a 20 if she does take an INT boost when she gets a new power.

Agent Harker purchases equipment, and ties up loose ends.  She has 22 HP, which is the result of 3d10- 1st Level PCs in Guardians begin with 3 Hit Dice.  Her AC is 18 - 15 for her Ballistic Bodysuit plus 1 for her forearm shields, plus 2 for the Amulet of Alucard.  She has a +1 Attack Bonus from her class, and does 1d4 damage on a punch or kick thanks to her Martial Training.  She has 6 Energy Points and a Saving Throw of 12.

Upon completing Agent Harker, Randi said "I love her!"  I always enjoy when players are excited about their PCs and want to play them.  I very much enjoyed this first foray into Guardians PC creation, and look forward to doing some more, then taking this game for a spin.

The "What If Gygax..." series also includes Colonial Troopers and Warriors of The Red Planet, both of which I own and plan to delve into soon. 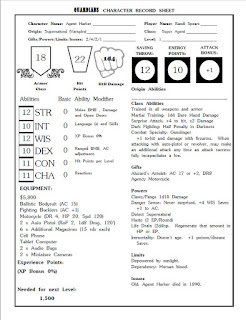