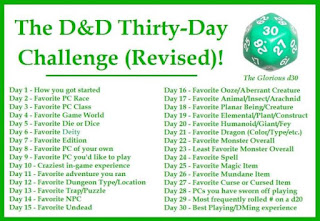 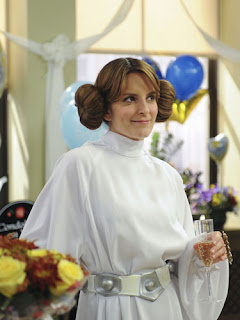 I have a lot of creatures I like to use in D&D and a whole bunch of them fit into the categories Humanoid, Giant and Fey.  I've used the ubiquitous Orcs, Goblinoids, Gnolls, Kobolds etc. many, many times as they are the creatures that in my D&D game worlds tend to rival the more standard PC races in population and expansion.  Giants I tend to use quite a bit more sparingly, because of the Voyager Law of Borg Conservation.  See, in ST:TNG The Borg were the most frightening, implacable foe the main characters had ever seen.  By the time of Voyager, a smallish cruiser could poke about in the Borg home system and come home safe.  Voyager took the Borg and made them mundane, workaday, less scary.  I want to avoid doing that to giants as much as possible.  When there's a giant involved, it's got to be a BIG DEAL.  Not ho-hum, another giant. 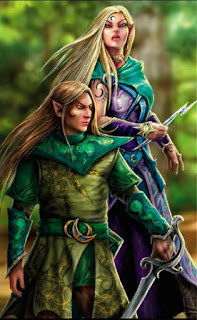 For my favorite, though, I'm going to have to break character for a moment.  I am a hardcore fan of BECMI D&D.  My answers thus far on this 30-Day Challenge  have been filtered through that base assumption.  When I started thinking about this one, though, I kept drifting back to something that was popularly introduced in 4th Edition that I really thought was groovy - Eladrin.

Eladrin could be summed up as "high elves," but that doesn't quite do them justice.  Eladrin are an elven race who are still connected to the Fey plane, or "Feywild" in 4e parlance.  They have the ability to Fey Step, a short range teleport, by phasing into the Feywild in one place and back out in another.  This description intrigued me, and I created my own twists on the background of the Eladrin.

For my first 4e character, I played an Eladrin Wizard who had a sister, an Eladrin Rogue.  I created the lore of my character to interpret the Eladrin affinity for and ability to step into the Feywild as an artifact of their being native to the Feywild- but for some reason banished from it.  This banishment means that each time an Eladrin uses Fey Step, they can momentarily see the beloved home plane on which they can no longer dwell.  That moment of being "home" is immediately yanked away as they are forced to re-enter the Prime Material Plane.  This makes the Eladrin an excessively aloof and melancholy race.  Their haughty attitudes serve to hide their profound sense of being forever denied existence in the world that actually makes sense to them.  They are in general a humorless and homesick race, mysterious and even a bit forbidding to the other races given their spooky eyes.

OK, so most of what I like about Eladrin are things I added to the racial description for my own games.  But there it is.  My favorite Fey that isn't Tina.